Do you know what Japanese high school students wear? It’s not just a uniform but a tradition that has been around for centuries.

The Japanese school uniform was first introduced in the late 1800s.

It wasn’t until much later, in the early 1900s, that the uniforms became standardized and began to look the way they do today.

The white shirt and sailor-style collar are based on the uniforms of the British Royal Navy.

During World War II, the Japanese military adopted the same uniform style for their soldiers.

After the war, the Japanese school system kept the uniforms, becoming an iconic symbol of Japanese culture. Here are some fantastic facts about Japanese school uniforms you may not know:

1) Why do the Japanese wear school uniforms?

There are a few reasons why the Japanese wear school uniforms. One reason is that it helps to create a sense of community and belonging in schools.

The uniforms also help identify students as part of a specific school, which can help prevent bullying.

Many believe that uniforms allow students to focus on their studies rather than socializing or worrying about wearing.

2) What are Japan’s two most common types of school uniforms?

The two most common school uniforms in Japan are gakuran and sailor.

These uniforms have become very popular throughout Japan, and they are often considered symbols of Japanese culture.

3) Do all schools in Japan require students to wear uniforms?

Not all schools in Japan require students to wear uniforms, but most of them do.

A few exceptions, such as private and international schools, allow students to choose their clothes.

However, even these schools typically have uniforms that students are expected to wear on special occasions.

4) What is the school uniform for girls in Japan called?

The sailor uniform, typically worn by girls, is referred to as ‘seifuku‘ in Japanese.

Seifuku can also refer specifically to uniforms that students at private schools wear.

5) What is the school uniform for boys in Japan called?

The gakuran, typically worn by boys, is referred to as ‘gakusei-kei’ in Japanese.

6) How much does a school uniform cost in Japan?

The cost of a school uniform in Japan varies depending on the type of uniform and the school.

However, according to a survey conducted by the Ministry of Education in 2017:

The average price can be higher for private elementary and junior high schools.

7) Is wearing a school uniform mandatory in Japan?

No, it is not. Though many schools require students to wear school-specific uniforms, some still don’t.

And then some individual teachers may not enforce wearing uniforms in their classes.

8) What type of materials are school uniforms made from in Japan?

School uniforms in Japan are often made from polyester and cotton blends.

They can be machine-washed and relatively low in maintenance. Some schools have stricter uniform policies and require that the uniforms be dry-cleaned.

9) Is there a particular type of footwear students in Japan are required to wear?

The Japanese school uniform almost always requires students to wear black shoes made from leather or vinyl with laces and rubber soles.

Many schools also require the boots to be polished regularly, and in some cases, they have a different color for summer and winter terms.

10) What are the benefits of wearing a school uniform in Japan?

Following the 2011 Great East Japan Earthquake, students have been increasingly pressured to wear uniforms because it makes it easier for rescuers to identify them.

There have also been reports of parents feeling more comfortable about their children attending schools that require uniforms because they feel that it will make locating their children in case of an emergency.

11) What do students do if they lose their uniforms in Japan?

Losing a student’s school uniform is cause for concern. So, what do students do in Japan if they lose their uniforms?

Students who lose their uniforms will borrow them from classmates or friends. But there are also cases where they buy second-hand uniforms at local stores.

Students’ parents typically buy replacement uniforms since most students cannot afford to do them independently.

In those cases, students don’t have to buy a whole new uniform but can instead borrow the sports gear from the school as long as they return them afterward.

12) Why are Japanese school uniforms sailors?

At that time, the Japanese navy was one of the most potent navies globally, and its uniforms were seen as very stylish and modern.

The second reason is the weather in Japan. Unlike in other countries, where it is typically colder during the school year, Japan has a relatively warm climate.

So, the Japanese school uniform is lightweight and cool to wear.

13) Do all students have to wear the same type of uniform?

There is no one answer to this question because it depends on the school and the region. However, students can wear two types of uniforms: a standard uniform or a sports uniform.

For high school students, the uniform is usually much more casual.

And in some cases, there is no uniform at all, and the students are allowed to wear whatever they want.

15) What colors are Japanese school uniforms?

This also depends on the school and the region. However, the standard uniforms are generally white, black, or blue.

Sports uniforms are often a different color, such as red or green. And high school uniforms can be any color that the school chooses.

16) Do students have to wear their uniforms on weekends and holidays?

In general, students wear their uniforms on weekdays and wear something else on weekends and holidays.

17) Can students wear other clothes on top of their school uniforms?

In some cases, yes. This is generally permitted if the shirt’s color matches the school uniform.

However, there is a growing movement among many schools where students wear “standard” and “casual” uniforms.

The “casual” uniform is usually just a shirt and tie (for the guys) or a blouse and skirt (for the girls).

It is not as formal as the standard uniform, but it is still within its guidelines.

18) Do all schools have uniforms?

No, not all schools have uniforms. The number of schools with uniforms is decreasing each year as more and more schools decide to go “casual.” However, many schools still require their students to wear uniforms.

19) Do students have to wear their school uniforms on field trips?

This also depends on the school and the region. Many schools still require their students to wear uniforms, even on field trips.

However, many other schools are starting to relax the rules and allow students to wear casual clothes instead of their uniforms.

20) Can you get in trouble for wearing your school uniform outside?

In general, no. But it is becoming more common for schools to have rules against this.

For example, some schools might not allow students to wear their uniforms to school-related events such as sports games or band performances.

Others might not allow their students to wear their uniforms on weekends or during vacation.

Yes, boys and girls can (and often do) mix clothing styles, such as wearing a skirt with pants. However, dresses are usually only allowed for girls and not for boys.

22) Why are Japanese schoolgirls’ uniforms so short?

The length of a uniform’s skirt is usually left to the school.

Some schools even have rather long skirts, but those are usually regarded as old-fashioned, and these uniforms can be seen less and less at schools.

The answer to that question depends on what type of school uniform you are talking about.

However, the school uniforms in manga and anime are often modified to appear more stylish by adding features such as loose socks, oversized blazers, fancy hats, etc.

There is also an element of Japanese culture that appreciates unique or distinctive features over conformity.

As a result, numerous schools have unique uniforms entirely different from anything seen in anime or manga.

Disclaimer: LoveForTraveling.com participates in affiliate programs like booking.com and Amazon, which means that if you click on a link from our site and book a reservation or buy a product, we get a small commission at absolutely no cost to you.

25) Can you buy school uniforms in shops outside Japan? 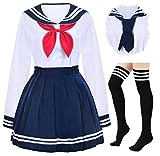 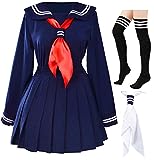 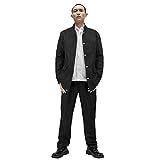 Yes, you can find shops that sell Japanese school uniforms outside Japan.

However, remember that it is difficult to find uniforms like those worn in Japan.

Most of the time, the uniforms sold outside Japan are slightly different in color or design.

If you are looking for a school uniform identical to the one worn in Japan, your best bet is to purchase it online.

Many online shops sell Japanese school uniforms, and the prices vary depending on the shop.

As a lifelong traveler and founder of lovefortraveling.com, I, Alex Deidda, have always been driven by my passion for exploring new places and cultures.

Throughout the years, I have had the opportunity to live in various countries, each offering unique perspectives and experiences.

My love for traveling led me to create lovefortraveling.com, a website and blog dedicated to helping people plan their trips.